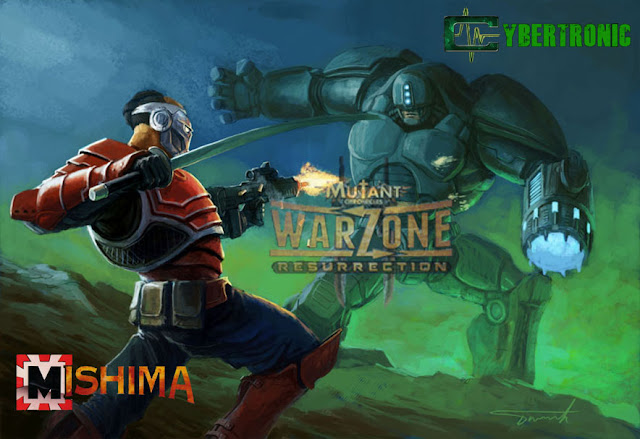 Year 1282 YC. Venus. Small trading post Herman G. on the north of Colonia Island
There was still chill in the air because 50day Venusian day begun only two standard days ago. Karl Needleman, mid-level Bauhaus scientist stroll nervously around remains of the abandoned munitions factory. He questioned his decision to come to this God forsaken place. Yes the weather here was more pleasant then on Ishtar Terra, not so humid, but he felt so expose, in little place lake this. He questioned his decision to leave his formal boss Duke Elector Heiss even more. Little he has known that there was one more man in this outpost that felt almost the same. Florian Blecher, corporate lawyer, at exactly the same time, sat at the local bar, sipping slowly locally distilled schnapps. One more thing they both did not know – two new bosses were interested in their service. Recon patrols of Mishima and Cybertronic were cautiously approaching outpost.


Shiro-X stood at the rocky outcrop overlooking clearing in the forest where Herman G. outpost ley. HQ broke radio silence last night with short coded message: identity of their opponent in this mission is known. Cybertronic recon force was spotted in nearby area. Those walking toasters. But not all news were bad, they had another civilian that wanted to switch sides. Shiro-X knew that enemy will know he is coming, because of breakage in radio silence. But other information was worth loosing element of surprise.
His plan of battle was simple: He will lead bulk of his force, all of his grunts directly toward his original target. When target is secured, he will order ronin samurai who leads ashigarus to withdraw laying covering fire. After last night massage, hi sent his demon hunters to out-flank outpost from the left. When they signal their arrival, ronin samurai will make fake attempt to advance in the middle, to attract enemy troops on them-selfs. If ancestral grace is on him, his outflanking force and fast dragon rider troops from reserve would have a chance to grab target number two- if not, hi will commit his elite red devil unit to their help.
They must be quick because some Bauhaus patrol can stumble across outpost, and shatter his plan.

No plan is good enough to survive contact with the enemy. Crimson devils led by Screaming devil could not be restrained, and contrary to my command infiltrate Bar building. That was pure luck, because, ronins had to move around old factory building, and as they sprinted toward our target, infiltrated machinators snatch him in front of our nose. We were just too far to intervene. To make matters worse, those poster boys in their shiny amour joined machinator, and from that shine we could barely see our target any more.
On our left flank, screaming devils made contact with other target.They start withdrawal, but were under tremendous pressure from bulk of opponent troops and walking monstrosity of Voltigeur. They lost two of their own included HMG. I quickly ordered Dragonrides to their help, and hoped that our flanking unit of demon hunters will arrive on time. 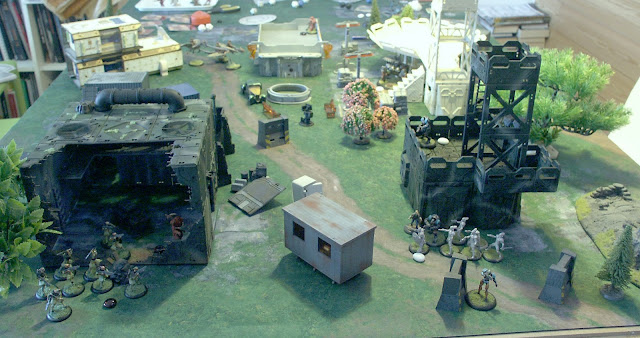 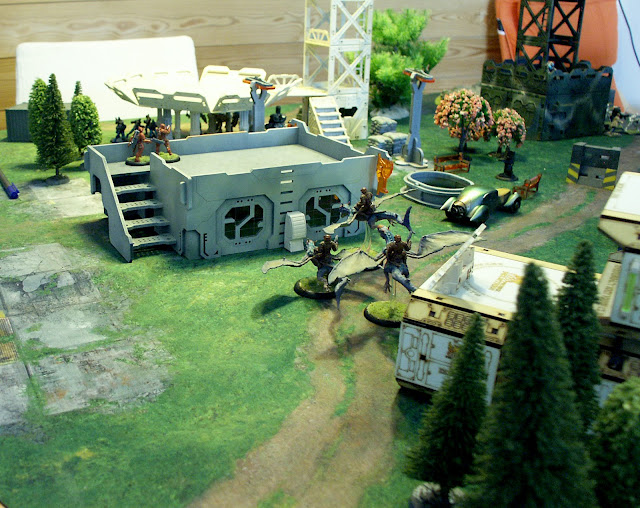 Ashigaru mortar triad to stop machinator with his shell, and would be whipped for his miss if he did not scatter right amongst mirrorman, killing all but one and that pesky Pieter Diamond. But shock of the exploding shell was too much, and both survivors turn they back and run out of engagement. 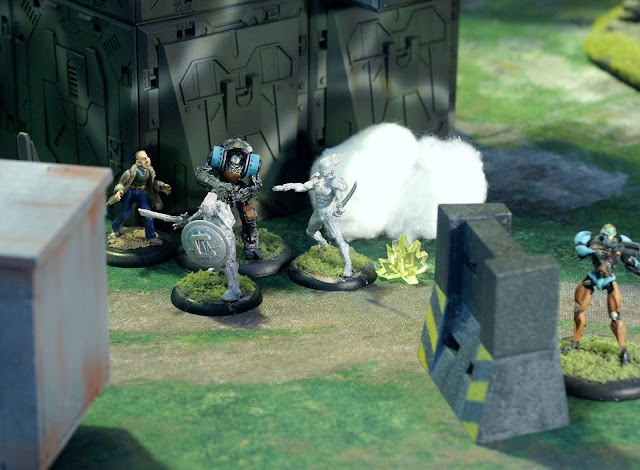 That walking toaster that commanded cybertronic force, run himself between retreating scientist and my force, and other machinantor with HMG constantly papered my brave troops from his fortified nest in old bunker. If our position was not difficult enough, mechanical scorpion unburrowed right in front of us. I must report to HQ that our ashigaru, though just simple peasants, acted bravely and stand their ground when they lost half of their number to machine gun fire.
In the centar monstuos Voltigeur let loose his drones and they immediately rushed toward our lines. Dragonriders reacted and show their beasts in front of drones, engulfing them in flames. But drones, except one, miraculously escaped from flames so riders had to put bullets in them and finished two more. Our demon hunters arrived in time and push themselves in flank of enemy force like thorn, killing all but two chasseurs. That gave time to crimson devils to begin extraction of our target toward our lines.

Enemy commander rushed strait at me, but I skillfully evaded all his blows. When my ronins saw that, they throw themselves on commander and mechanical scorpion, missing commander but killing scorpion. In the center, last drone exploded in front of two dragon riders resulting in just one superficial wound. Without drones in front of them, dragon riders throw their beasts on new targets, monstrous Voltigeur and machinators. Flame melted down machinators but just scratched big machine. 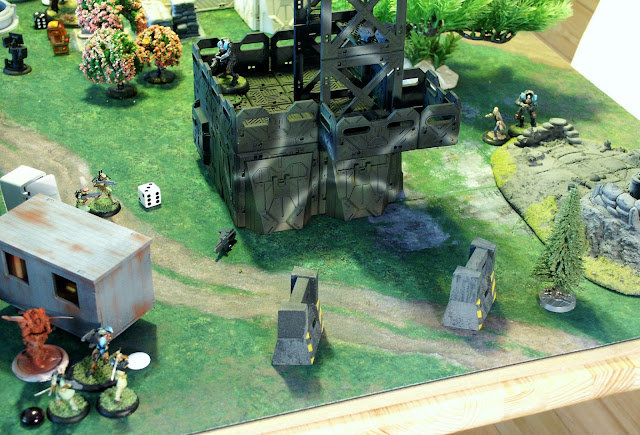 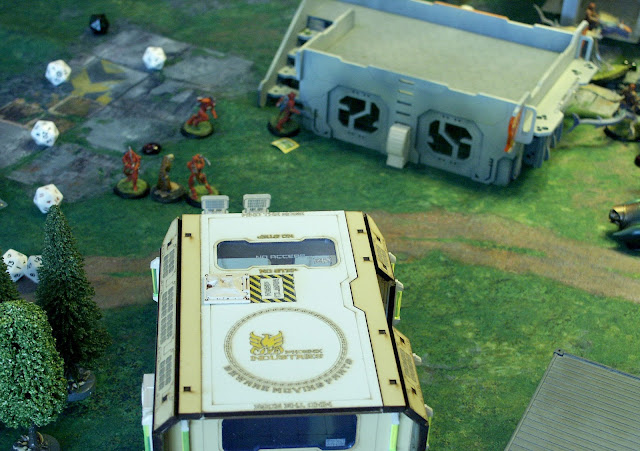 Realizing that other target is out of their rich, both commanders withdraw their troops back to the forest.  It would have been draw, except that cowardness of Pieter Diamond made this engagement our moral victory.
Mission points:
Mishima – 10
Cybertronic – 5 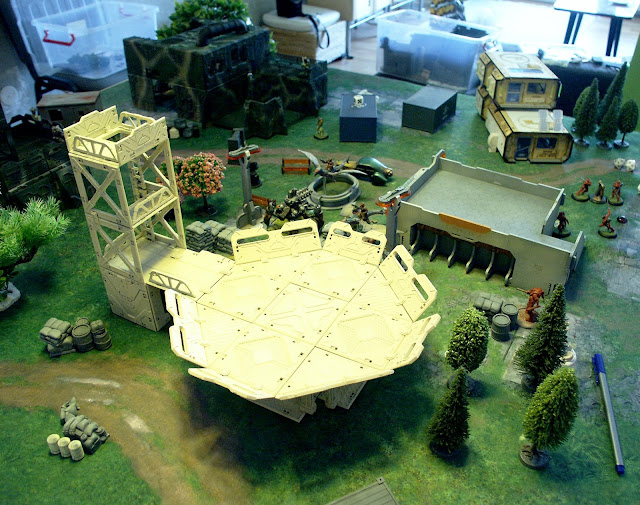 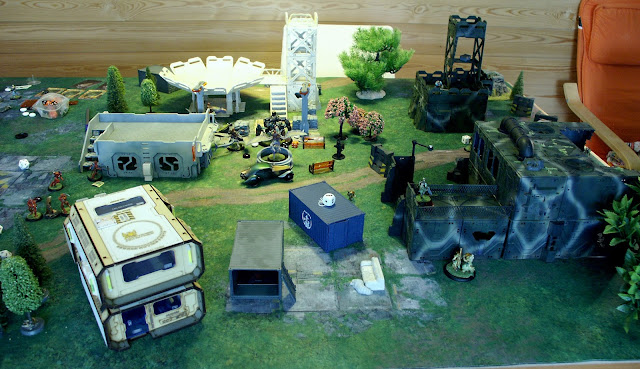 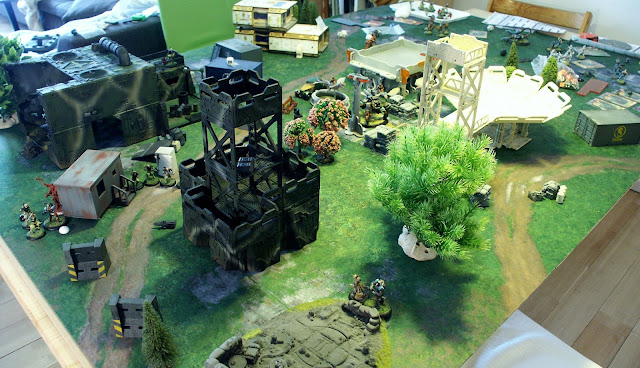 This was my sons and mine first game of Warzone resurrection. We played three turns, which took almost four hours (constantly looking at the rules book). We had a good time and battle unravels in to the great story. Game was even, but lucky scatter of mortar shell, and unlucky moral roll for my son, turned game in to my win.
Things to remember: Flamers rule and Voltigeur is a monster. Custom made unit cards are a must-have for speeding of the game.
Labels: Frontline news Warzone ressurection